OK, everyone. Here is a boy that is very near and dear to my heart. His name is Brett, he's eleven, he has Down Syndrome, he's an orphan, and he's a fighter. Brett  Brett was abandoned in an open field at birth, where he remained for about six hours. SIX HOURS all alone as a newborn in a field. That shows you just how much of a fighter he is. Oh, here's his picture. 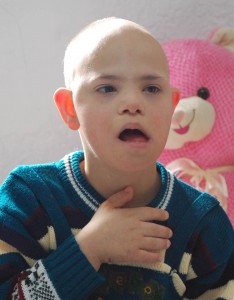 He has alopecia areata (hair loss) which is not uncommon in children with Down Syndrome. Sometimes it's temporary, and sometimes it's permanent. Look at his eyes, though. I think his eyes are so full of soul. He hasn't given up on life yet, and that's a very good thing. Brett can walk. He cannot talk, but he can communicate with gestures. The honest truth is that he probably got very minimal care for most of his life in the institution. I firmly believe he'll be able to learn to talk after coming home. This boy is just such a fighter and doing pretty well despite his circumstances.

Brett is in a country that is known to be very easy to adopt from. Married and singles are allowed to adopt. You have to be fifteen years older than he is. The process is usually about a year, and the travel is easy. The travel is one week in country getting to know him. You then go home and come back a few months later for another week. That second trip is when you would bring him home. Also, you can adopt multiple unrelated children at the same time from this country for very minimal extra cost.

Someone, please save Brett. If you can't adopt him, please consider donating to his grant. A larger grant helps others to see him. Brett is a fighter and will make an excellent son.

I am an Angel Tree Warrior for Igor!